The Success Story of Amnesty International

With Zammad we have such a good memory

Amnesty International's Internet Commission - a team of ten volunteers - has been using Zammad for two years with the primary task of providing and supporting all kinds of digital services for Amnesty International members in Germany. We are very pleased that our system supports them in their valuable work. Stephan Heffner, their spokesman, told us about their success story with Zammad. 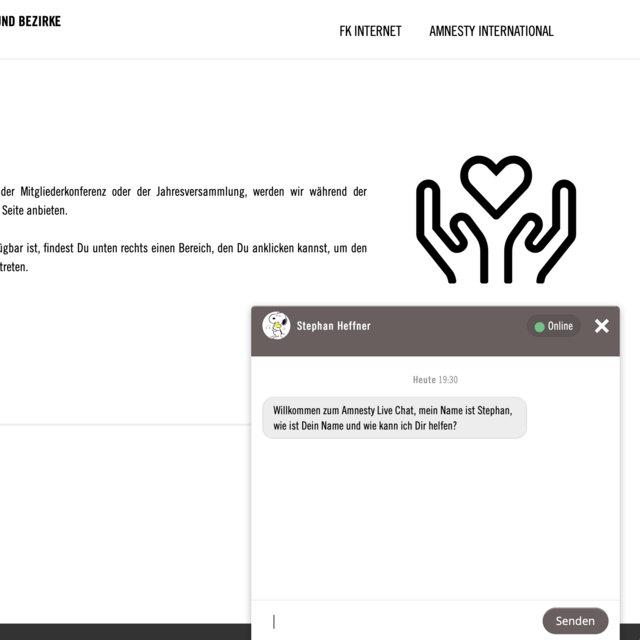 There are three words that describe Zammad perfectly: intuitive, quick, and easy. The switch has definitely paid off: Zammad offers us more possibilities than we originally expected!

What Is Zammad Used for at Amnesty International?

The team of the Internet Commission is struggling with a number of challenges in its work: it balances support for membership alongside everyday jobs, it is scattered over several locations, which very often makes arrangements and handovers difficult, and the possibility of detailed arrangements within the team can only be realized once a month.

So what was really needed was a tool that would enable synchronization, knowledge base building, and automated processes. A team member knew Zammad and suggested it. Since then Zammad has achieved a lot: the helpdesk tool helped the team with the relaunch from a previous hoster, and provided valuable support during the move of more than 430 domains.

Zammad has also been used for an online event. Here the chat function enabled live support for participants with technical challenges within seconds, which worked so smoothly that the procedure will be repeated.

The Amnesty team uses Zammad primarily to answer general questions in their daily support routine. This way, up to 1300 tickets in German and English from 33,000 potential inquirers reach them every year.

But the tool is also used internally to create tasks for each other. "This is much easier and clearer than sending an email," says Stephan Heffner.

How Was the Switch?

Before Zammad, the team used a classic mailing list. However, this had many disadvantages: it was time-consuming, the correspondence of other employees was often not accessible, and mail histories were rarely stored for a long time.

The mailing list was followed by a short phase with a traditional bug tracking system, but the range of functionalities was not sufficient. Finally Zammad! It was set up and configured in just one week. For the team, the switch was smooth - Zammad impressed with its ease of use and intuitive interface. "New team members usually get used to it immediately," says Heffner.

"The users didn't even notice the switch," Heffner recalls. "Except that the Support became more reliable."

Out of office / replacement
View all features

For the Amnesty team, setting up an automatic response to each ticket has resulted in a far more positive service experience - after all, inquirers get an immediate reply to their message. The team then manages to meet the target response time of one day.

This is, besides the ambitious (and voluntary!) agents, also thanks to Zammad. Because of the customizable text modules and clear inline images, the Amnesty team can answer recurring requests much faster and more comprehensibly.

"Zammad is a huge relief for our team," says Heffner. "For a team of volunteers, such a tool would normally be out of reach. It's great that with Zammad we have found a solution that is feasible for us and that fits us so well."

The inquirers also benefit. Zammad helps the agents to meet the response time by automatically forwarding tickets to them if they are left untouched for too long. This ensures a faster response time and makes sure requests no longer get lost.

Heffner also appreciates Zammad's reliability: "We have never had a system failure in two years!"

Our membership is very diverse. That's why we want to take advantage of more opportunities for initial contact," explains Heffner. Alternatives to email, such as the integration of messenger services, are therefore becoming increasingly interesting. "Either way, we are curious to see where the road ahead is going - and how Zammad will develop.